In March of 2015, Apple attracted a great deal of attention when it launched ResearchKit, an open source framework that lets developers create medical apps designed to engage patients in research studies. About a year later, the company released CareKit to help people actively manage their own disorders. Now Apple has approved the release of several new apps for CareKit that are bound to attract even more attention.

Data Systems OneDrop, for instance, helps patients gain better control of their diabetes by letting them synchronize blood glucose readings from Bluetooth meters and continuous glucose monitoring devices via Apple Health. Among the systems that are compatible with OneDrop: Dexcom, One Touch Verio Sync, and AccuCheck Aviva Connect. The app also lets users share this data with others, log glucose readings, foods, medications, and activity, as well as save and share pictures, tips, and notes. It can also help patients set goals and track daily progress through AppleCareKit.

Iodine Start helps patients on antidepressants track their progress and the side effects of their medication. The free app shows consumers what to expect from their prescription and lets them share their progress with their doctor or therapist using CareKit. As the web site points out, nearly 20 million Americans have depression and finding an antidepressant that fits their needs is a real challenge; 60% say they experience significant side effects from these medications and half discontinue them before they see any real benefits. 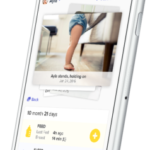